Today was my usual Thursday off and after running some errands I drove
over to Mt Vernon Cemetery. My plan is to photograph every headstone,
monument and grave marker.It's a big cemetery. So you'll forgive me when
I say it's going to be a monumental task.

I spent part of my visit trying to map out all the roads in the place, Some of
them are named and have "street signs". Others are grass covered and run
down the middle of some of the areas between the paved  roads. So far
I've taken pictures of the sites near South Grove and Vernon Ave and one side
of the first section of Central Ave. Central is the main road that runs throughout
Mt Vernon. I'll post some of the pictures here of course and the older graves
I'll post to Find A Grave. I have some reservations about posting gravestones
from more recent graves but that's a subject for another post.

Meanwhile, here's a photo I took today of a monument I'd shot from a distance
during the winter. 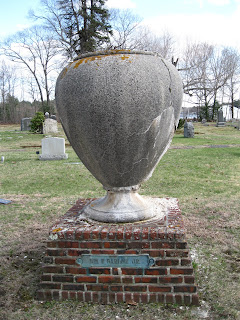 There's a brick base to the urn with an attached nameplate that simply reads
"Wm. F, Barlow Jr."  There are no other markers around the urn and so far I
haven't found anything else about him. It's the only monument of its type in
Mt Vernon and whatever plant once graced the top is long dead.One day I
hope to solve the mystery of who Mr. Barlow was!
Posted by Bill West at 7:21 PM 1 comment: Links to this post

As I've noted before, Mt. Vernon Cemetery has some areas off the
main access roads and I'm only now able to explore these since the
snow has finally melted. So today on my way to the grocery store
I swung through the cemetery with the idea of visiting one of those
spots and getting some pictures. 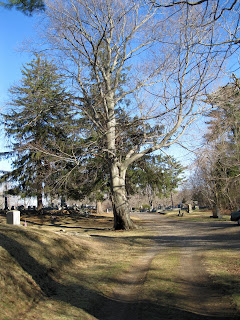 The area I visited is down below the Center Ave area and contains
some massive trees and graves arranged on three small hills. I
hadn't realized before that there was a small pond concealed by
bushes and a larger one beyond that borders the Frolio School
on the other side. There's several smaller roads running alongside
all three hills and I parked at the intersection of three of them.

As I got out of my car I noticed there were two teenagers in hoodies
down the path on the driver's side of the car.  They glanced back up
the road at me for a second, then one shrugged and passed the joint
they were sharing back to his or her companion.

Well, I decided to take the path in front of my car. I walked a few yards
down and found a pair of mallard ducks in the concealed pond, so I
took their picture. Then I noticed the plot behind me had a rather
elaborate stone wall around it and took a picture of that. But a few yards
down the road I realized there was a car that had been hidden from
view from Center Ave and a young man and woman were engaged in
umm...a little afternoon delight. 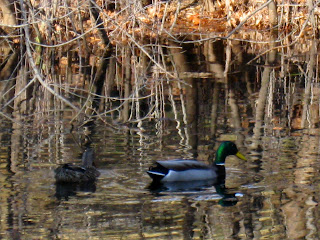 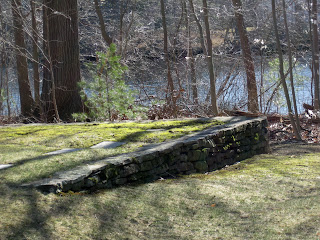 I retreated back to my car and went around to the path on the passenger
side which skirted the backside of the small pond. I took a few more
pictures, including one of a family plot that appears to have never been used.
I wondered what had caused that before taking a few more pictures., 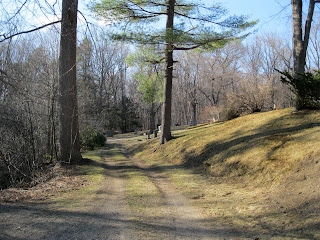 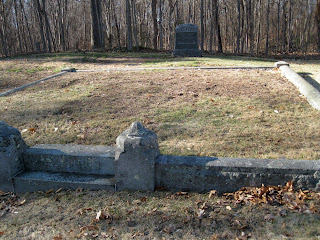 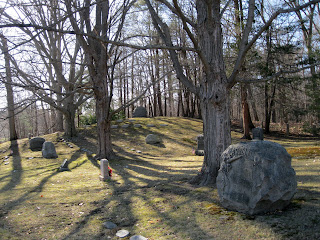 It was at this point I realized that perfhaps the miscreants (the tokers) or the
smoochers might take exception to having someone hanging around taking
pictures and walked back to my car and drove away.

It was only later that I realized that the pair that could have really needed
more privacy were the poor mallards, who at this rate may never start
a family!
Posted by Bill West at 4:35 PM 1 comment: Links to this post 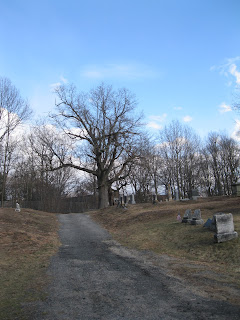 Last Thursday I did my usual routine which now includes a drive through
Mt Vernon Cemetery. While it's a big place it's not huge and there are
areas off the main ones that I'm looking forward to exploring in the
coming weeks. One of them is the hill just across from the Henry
Dunham plot.It overlooks the pond from the other side and the
railroad tracks run by the chainlink fence at the top.

All Winter long I've driven by a small plot at it's left lower corner that was
visible from the road but was unreachable because of the heavy snow. There
are four stones bordering a small extension of the pond and partially entangled
by a large thorn bush. I became curious about it and now that the snow had
melted I took the opportunity to walk in to take some pictures. But when
I did I found myself frustrated. The inscriptions on the gravestones were
facing out towards the road, and they were covered by that impenetrable
tangle of thorns. So for the moment I still don't know the names of those
buried there. 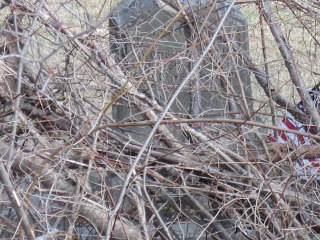 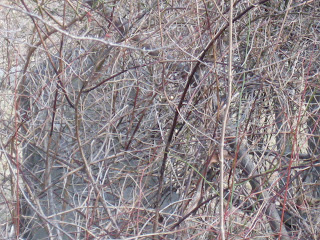 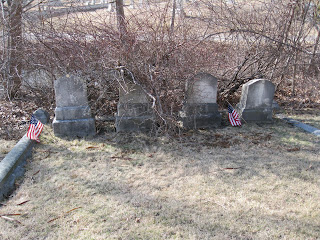 I walked about a bit more heading up the hill as the train went by in time
for me to take a picture. I'd just about reached the fence when I found
a toppled headstone which, when I looked closer, turned out to belong
to another of my Dunham cousins. I took a picture, then noticed there
were three empty stone bases next to it. Were the missing gravestones
victims of vandalism or had harsh New England winters knocked them
over? Charles A Dunham's headstone was nearly covered by dirt and
grass; were his family's markers covered completely? 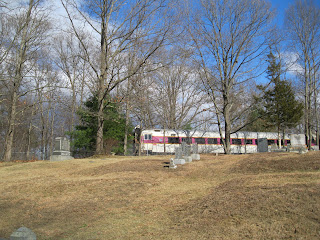 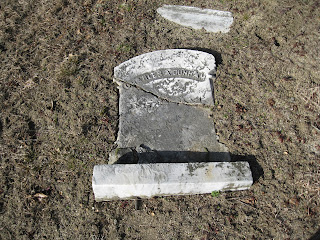 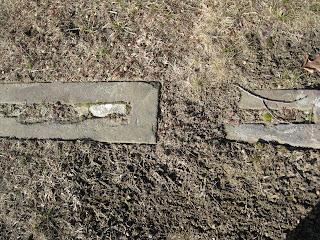 I'll check the area out more closely the next time I'm there. And there
be another way to know who was buried there, but I'll blog about that
when I find out for sure. 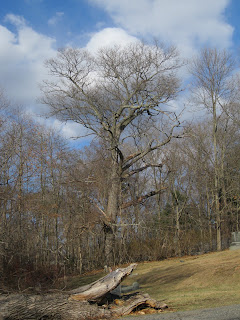 Posted by Bill West at 12:17 AM No comments: Links to this post