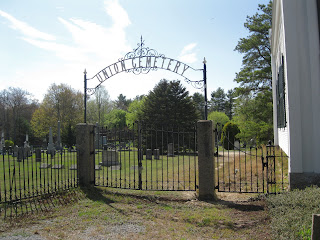 During my trips last year to area cemeteries here in southeastern Massachusetts,
I came to the conclusion that  9 out of 10 times where there is a white wooden
church, there is a cemetery somewhere close by. In many cases the cemetery is
located on the church grounds or next to them, as in the Union Cemetery in South
Carver, Ma. 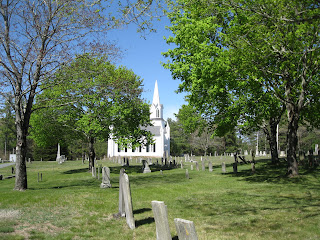 The Union Church dates from 1855, but the cemetery is nearly 100 years older,
and as it turns out it has significance in my family history:

The land for Union Cemetery was given from the Barrows estate. The oldest
inscriptions are for the year 1777 in memory of Nathan who died Oct. 22nd
and Bethuel who died Nov. 2nd of that year, both sons of Jonathan and Lydia
Barrows. The west addition was made through a gift from Maj. Thomas B. Griffith,
and the ground was cared for during the last half of the last century by William
Savery in an individual capacity. In 1906 the cemetery was incorporated as "The
Union Cemetery of South Carver" with the following incorporators: Alfred M.
Shaw, S. Dexter Atwood, Henry S. Griffith, Josiah W. Atwood, N. G. Swift, John
Bent, Gustavus Atwood, Marcus Atwood, John F. Shaw and Mrs. Eldoretta McFarlin.
-History of the town of Carver, Massachusetts: historical review, 1637-1910  By
Henry S. Griffith, (E. Anthony & Sons , New Bedford, Ma, 1918)p249

The Union cemetery is fortunate in the possession of the Jesse Murdock and
Fanny Murdock endowments for general repairs, which with the many
endowments for private lots insures the perpetual care and improvement of
the ground and with the many costly monuments this cemetery has earned
the name of:  "The Mount Auburn of Plymouth County."- P247 "

I didn't know when I visited Union Cemetery that it was on land once owned by
some of my Barrows and Griffith relatives. I did know that my 6x great grandfather
Ephraim Griffith was buried there. and while "The Mount Auburn of Plymouth
County" might be a bit of civic puffery, Union Cemetery is beautiful. 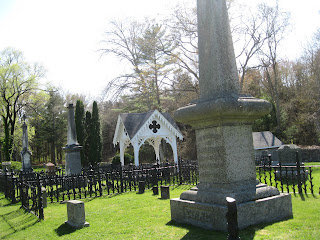 To be continued.
Posted by Bill West at 7:11 PM No comments: Links to this post

After leaving Lakenham Cemetery I continued further down Rte 58 to another
location in Carver, Ma. The Central Cemetery is situated behind the United
Church of  Carver, and there are more of my Barrows and Ellis cousins laid
to rest here. 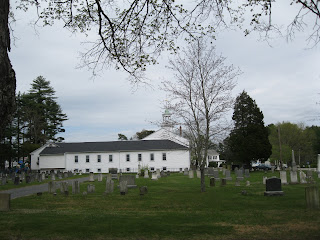 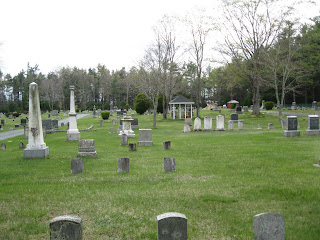 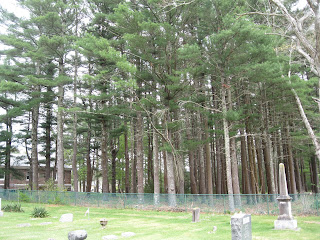 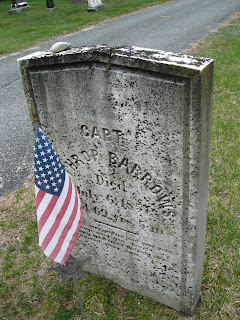 This is the headstone of Lothrop Barrows,  my 2nd cousin 5x removed. It's right
at the entrance to the cemetery, on the right hand side as you enter through the
gate by the Church. I didn't realize it at the time but there's something wrong with
this picture that I took. Lothrop Barrows was a Captain in the Massachusetts
State Militia and he died on 6ul 1857. The medallion on the flag holder is one for
a member of the Grand army of the Republic, the Civil War Union Army veterans'
organization. My guess is it was uprooted from it's proper location either by the
wind or human hands and was put here by mistake by someone trying to show respect.
Posted by Bill West at 2:21 PM No comments: Links to this post