The Old Burial Ground is located in Kingston, Ma., the town just north of Plymouth. It's located
behind the First Congregationalist Church on Route 106 and has some very interesting headstones.
Some of them have quite a bit of information about the people buried there. Here's one for a gentleman named Uriah Bartlett: 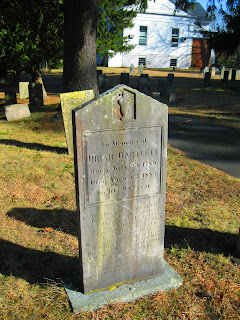 It's amazing to think that a man who died in 1883 had spoken with a man who had known
Mayflower baby Peregrine White!